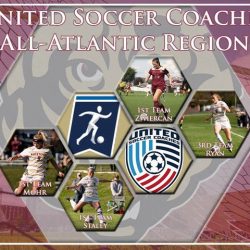 In addition to being named to the United Soccer Coaches first team, Staley has also earned Division II College Coaches Association (D2CCA) All-Atlantic Region first team and CoSIDA Academic All-District honors. She has been a two-year captain for the Golden Bears and helped the team tally 11 shutouts during the 2017 season. Staley earned All-Atlantic Region honors for the first time.

With her first team selection, Mohr is now a two-time All-Atlantic Region First Teamer from both the D2CCA and United Soccer Coaches in addition to being a two-time All-Pennsylvania State Athletic Conference (PSAC) First Team honoree. The sophomore finished the year tied for the team-lead with 14 goals (third in PSAC) and 28 points (fifth) and ranks seventh in program history with 25 career goals.

Zwiercan receives her second all-region award with this selection, now named a First Team All-Region performer by both the United Soccer Coaches and the D2CCA, which also honored her with the Atlantic Player of the Year.

Additionally, the forward earned Division II National Athlete of the Week honors and PSAC Athlete of the Week recognition after an 11-point week in early Sept. She tallied 14 goals (third in PSAC), nine assists (first) and 37 points (first) this season. The nine assists and 37 points lead KU, and 14 goals is tied for the team-lead. Zwiercan heads into her junior season, sitting fourth in program history with 15 career assists and 10th in career points with 53.

The postseason honor is the third for Ryan following the 2017 season, having already received All-PSAC Second Team and CoSIDA Academic All-District awards. A first-time team captain as a junior, the midfielder contributed four goals and four assists.

The Golden Bears finished the 2017 season 16-4-1, tied for the second most wins in program history. They made their seventh NCAA Tournament appearance in the last nine years, falling in the Atlantic Region First Round 2-1 to Notre Dame (OH).