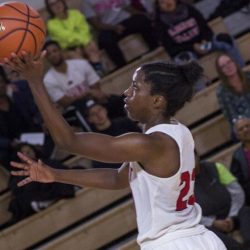 Lofton helped lead the Lions to a perfect 3-0 record last week by scoring in double-digits in all three games, and posted one double-double. She averaged 13.3 points, 8.7 rebounds, three assists, three steals and two blocks per game during the week. In addition, Lofton shot 50% (13-of-26) from the field during the week and (14-of-18) from the free throw line. She started the week with the double-double against Rowan behind 15 points and 10 rebounds before following that up with 13 points, seven rebounds, three assists, three blocks, and three steals against Stevenson. Lofton nearly had another double-double against Arcadia on Saturday with 12 points and nine rebounds along with four assists, three steals, and two blocks.

The Central Bucks South graduate ranks sixth among MAC Commonwealth teams with 8.7 rebounds per game and 3.5 assists per game, while ranking second in steals per game with 2.8. This is the third time in her Albright career that Lofton has earned player of the week honors after winning it twice last season. Albright now has won the last two women’s basketball player of the week honors after Devan Horka earned it last week.

The Lions will return to action Wednesday, December 6th as they will continue MAC Commonwealth play against Widener for an 8 p.m. start.