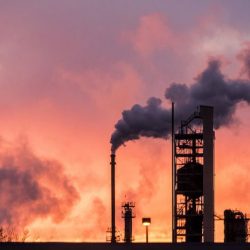 PHILADELPHIA – A new report shows that pollution from oil and gas facilities in Pennsylvania and nationwide is disproportionately harming African-American communities. The report, “Fumes Across the Fence-Line,” documents health impacts of living near oil and gas pollution, including increased incidents of asthma and cancer as an environmental justice issue. According to Mollie Michel, a Pennsylvania field organizer for Moms Clean Air Force, 38 percent of African-Americans in Pennsylvania live in a county where there is a gas or oil refinery, and almost 80,000 live within half a mile of oil and gas infrastructure.”What we’re seeing in the fence-line communities that live the closest is much, much higher incidents of asthma hospitalizations, higher respiratory diseases, and the toxins released will cause respiratory diseases, headaches and cancers,” she states.The citywide asthma rate in Philadelphia alone is twice the national average.Michel points to one case study in the report that focuses on South Philadelphia, which shares a neighborhood with the oldest and largest fossil fuel refinery on the East Coast. She says the impact is dramatic.”African-American children suffer almost 3,000 childhood asthma attacks, causing 2,100 lost school days a year because of increased methane pollution and ozone smog from oil and gas activity,” she points out.Michel says the Philadelphia Energy Solutions refinery is the source of more than 70 percent of the toxic pollution in that city.Michel notes that Gov. Tom Wolf’s effort to control methane emissions from new oil and gas facilities in the state is a step in the right direction, but more needs to be done.”That doesn’t address the hundreds of thousands of existing sources of methane pollution in the state,” she points out. “And that’s the stuff that really needs to be addressed – our existing sources that are every single day polluting the air and making children sick.”The report finds that, nationally, more than 1 million African-Americans live within half a mile of existing natural gas facilities.