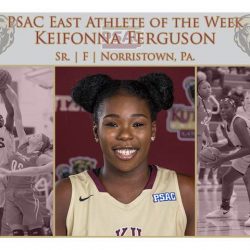 In KU’s three victories last week, Ferguson averaged 12.7 points and 11.0 rebounds, shooting at a 68.2 percent clip from the field and making all eight of her free throw attempts. The Norristown-native tallied a season-high 14 points and nine rebounds in a non-conference defeat of previously undefeated-Jefferson on Nov. 19. Ferguson then followed that up with a banner weekend in the Maroon and Gold’s first two PSAC home games, racking up an even 24 points and 24 rebounds, ripping down 13 of those on the offensive end.

She has now tallied at least nine rebounds and double-digit scoring outputs in three consecutive games after not reaching either mark in her first six games this season. Ferguson’s up-tick in play has directly contributed to her team’s success, with the Golden Bears riding a four-game win streak heading into this weekend’s matchup with Seton Hill.

The award for Ferguson is the first Athlete of the Week honor of her career and the second consecutive for the women’s basketball program, with Alexis Smith winning it last week (Nov. 20-27).