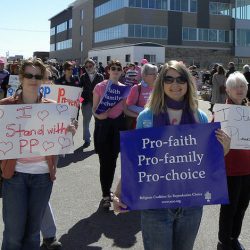 HARRISBURG, Pa. – Without a hearing, the House Health Committee voted Monday to send a restrictive anti-abortion bill to the floor for a vote. Senate Bill 3, which already has passed in the state Senate, would ban all abortions after 20 weeks of pregnancy, and makes no exception for rape, incest or fetal abnormalities. It also would ban the procedure known medically as dilation and evacuation, accounting for less than 2 percent of all abortions. According to by Lindsey Mauldin, deputy director for Planned Parenthood Pennsylvania Advocates, the full House could consider the measure Wednesday with a final vote as soon as Monday.”This bill would be the most restrictive abortion ban that we’ve seen in the country,” she states. “And the bill bans a medically appropriate method of abortion and is therefore unconstitutional.”Supporters of the bill say women have a greater chance of dying from abortions performed after 20 weeks, but the Pennsylvania Medical Society opposes the bill.Mauldin says Gov. Tom Wolf has called the bill “an attack on women” and stated publicly that he will veto the measure if it reaches his desk.”This is a political move by the speaker and other Republican leaders to draw a line in the sand,” Mauldin states. “This isn’t about women’s health. This isn’t about protecting women. This is about politicians interfering with personal medical decisions.”Opponents of the bill are concerned that, with the aid of conservative Democrats, Republicans might be able to pass the measure with a veto-proof majority. Both chambers would have to vote to override a veto.But Mauldin says fetal anomalies sometimes aren’t detected until after 20 weeks, and the restrictions in the bill potentially would further victimize women who already have suffered.”In a time where we’re seeing all of this attention paid to women who are victims of sexual assault, not having exceptions for rape and incest is especially egregious,” she stresses.Mauldin adds that women and their doctors should be making such health care decisions, not politicians.