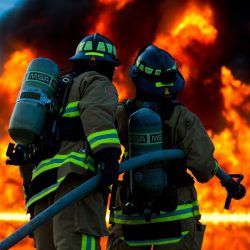 “Volunteers comprise 70% of firefighters in the United States” according to the National Volunteer Fire Council (NVFC). Volunteer fire departments are struggling to provide adequate staffing for various calls, buy sufficient equipment and pay day to day bills. This is due to dwindling numbers of firefighters and a huge increase in the volume of calls. According to the National Volunteer Fire Council “the growth isn’t enough to meet the steady increase in call volume, which has tripled in the last 30 years due in large part to the increase in emergency medical calls.” As the number of incidents is rising exponentially the number of firefighters is remaining the same. This is no different in Berks county.

A majority of the fire companies in berks county are rural 100% volunteer departments. A few of them have a paid crew on but still rely on the volunteers for a large portion of the manpower. “Volunteers at fire companies across Pennsylvania have dwindled, dropping from 300,000 in the 1960’s and 70’s to approximately 50,000 today,” as stated in an article by Pennsylvania Township News. One reason for this is the number of hours of training required.  For example, the essentials of firefighting course most departments require is an 88-hour course. Most firefighters also have basic vehicle rescue technician, hazards materials operations, cardio pulmonary resuscitation and basic first aid, pump operations, emergency vehicle operations, rapid intervention team training, and other various courses. Most citizens don’t have time or do not want to spend that much time doing something very dangerous for free.

Most volunteer departments have to fund raise for most of the money they make. There are a few federal or state grants but a large majority of the money in a rural department is raised by the department themselves. The NVFC estimates that “[t]he cost to train and equip a firefighter can exceed $20,000.” Spread that across only ten members, which isn’t enough to properly run a fire department, and you are looking at $200,000. That’s not to mention the cost of purchasing fire apparatus. Tankers, which are trucks that haul water to a fire scene and are vital to firefighters in rural areas that do not have the luxury of fire hydrants, cost about $500,000. A ladder truck can cost upwards of $1.3 million. That’s an insane amount of money to have to fund raise. Fire departments also have to pay for things like tools and equipment, building and truck maintenance, utilities, and fuel for the trucks.

Due to factors like decreasing volunteers, higher call volumes, and financial issues many fire departments in Berks county and surrounding counties are being forced to merge in order to continue to provide protection to the community. Western Berks Fire Department, Eastern Berks Fire Department, and Boyertown Area Fire and Rescue are three companies in the county that have recently had to merge. By combining the recourses of two or three fire departments into one larger department it decreases the amount of trucks that have to be purchased and increases the number of volunteers.  So, be sure to support your local volunteer fire department and thank them for what they do to protect complete strangers.