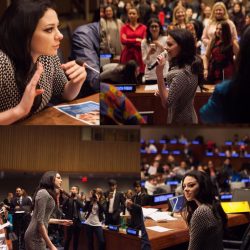 The young star, whose music and videos have been featured on Disney and Nickelodeon and who serves as a United Nations Celebrity Youth Leader, will talk to the students about bullying and mental health issues and share her own experiences with these challenges.

The singer has sold out shows all over the world, but she says performing at schools is one of the most meaningful parts of her work.

“Growing up was hard because I remember being told that I’m ugly, I’m this, I’m that. The bullying was physical, verbal and… even just being excluded, which is a form of bullying, was the hardest and most painful for me,” O’Connor said.

Now, her mission is to dispel the notion that bullying victims frequently feel: that it’s their fault. She said this can push children into trying to fit in and neglecting the qualities that make them unique. For instance, she said her height made her a target for bullies, but in fact was something that helped her land a modeling contract before her music career took off.

“If somebody’s really smart, really good at math, really good at science, they’re going to make fun of you for that,” O’Connor said. “Bullying is temporary, don’t change what’s not temporary: your talent. If you’re lucky enough to be different, don’t ever change.”

Her song “The Game” addresses the issues, and Ms. O’Connor hopes her school presentation is a “game” changer” in the world of anti-bullying and mental health.

For more information about the Ms. O’Connor and her school presentation visit meredithoconnormusic.com.