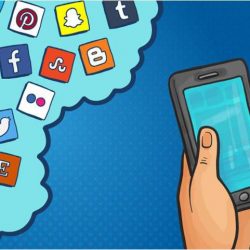 If you haven’t noticed there seems to be a lot of tension on the topic of nuclear weapons. If you turn on the the television to CNN you will be instantly informed about recent developments on a new weapon and whom that weapon is in the presence of. My opinion on this matter is that we are overlooking another potential weapon of mass destruction that is at everyone’s disposal. This weapon can be easily found on the internet on certain websites/stores, and the likelihood of this weapon being on your phone right now is very likely.The button to unleash this wrath of fury is a little bit more discreet than the big shiny red nuclear missile button that you see in movies and cartoons. The funny thing is that most people use this potentially deadly weapon to follow certain celebrities and convey sad poetic quotes to the public instead of using it for evil but it doesn’t mean that all people use it for good. I might refer to this thing as a deadly weapon but you might be more familiar with its actual name, Twitter. Twitter is a social media platform where someone can share and view immediate thoughts and opinions on certain topics that appeal to them. A person can share their thoughts and opinions by tweeting which is the act of writing a message in the parameters of a hundred and forty characters. This message, also known as a tweet is public and can be viewed by anyone who has a twitter account.To give you a general idea of how popular and influential this platform is I will compare Twitter users to the population of the United States. According to the United States census bureau, the number of American citizens living in the U.S. in 2016 is three hundred and twenty million people while the total number of users Twitter has is three hundred and thirty million users. That is like everyone in the U.S having a twitter account including the little babies that spit up on their mother shirt and need assistance to change their own diapers. Both Twitter and the country of America have the same number of people affiliated with their name but only Twitter has a slight edge with 10 million human lives more.A social media platform such as Twitter plays a key role in our lives since it is the most popular way for people to stay connected and informed about what is going in the world. The majority of millennials get their current events information through social media platforms instead of the old-fashioned ways like the newspaper and television. Not only does twitter has the power to inform us about current events it can also help shape our opinion about certain issues. For instance people who are under the magnifying glass of the national media and spotlight such celebrities and political figures are the ones who has the most influence on society. Celebrities who endorse certain brands and products can easily just tweet a message about how much they love this product and how they can live without it and it can instantly result in a spike in sales for that product. A celebrity like Leonardo DiCaprio can share the fact that he supports and is apart of many different Eco-friendly organizations by using Twitter. With Leo stating that fact through a tweet Eco-friendly groups can garner up a lot of support just because they are affiliated with his name. The information begins to spread because it has been posted on a well-known platform that is used by millions of people every day. It is not a bad thing for Leo to spread the word out about Eco-friendly groups but if there was another famous person out there who was pro-nazi they can easily garner the same amount attention just like Leo because of the platform being used.Twitter is in the national spotlight so that means that everyone’s opinions are in the national spotlight as well, people can react these opinions very differently. Not too long ago President Trump had been very open and public on twitter about North Korea’s threats to America, a subject that was very sensitive for most Americans to talk about at the time. If President trump had shown a slight bit of aggression or anger, even if he would’ve sounded weak or passive it could have triggered some kind of tension between to the two nations. Although President Trump’s twitter comments was very bland and neutral it still managed to get a reaction out of many people, it just wasn’t a fatal reaction. Not only can Twitter be a place to voice an opinion or a birthplace of new ideas it can also be the very same place where opinions and ideas go to die. With the right intention twitter could be a wonderful place where ideas can thrive and flourish but not all people use the app with the right intention. People don’t necessarily use the app with nasty intentions, whatever comes to their mind about the topic first will be what they want to tweet about. Most of the time people don’t really put their thoughts through a filter to see if it appropriate for the public eye. But when people do use this filter on their thoughts it can make them subconsciously suppress their real, genuine thoughts which might do more damage and good.I reference Twitter as a weapon because in the right hands it could be used as a great way to inform and protect, but in the wrong hands it can be a catastrophic way kicking up mischief and evil. This article’s intention is not to bash twitter but to inform people that there is a dark hidden side to Twitter that most people either don’t notice or become blind to.