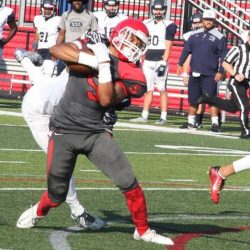 Jackson wrapped up his Albright career this season by finishing with 2,054 receiving yards on 163 receptions and 14 touchdowns. His play this season earned him First-Team All-MAC honors at wide receiver for the first time as a Lion.

The D3 senior classic is the third of five bowl games during the 2017 International Scouting Showcase, and was developed to honor the top D3 graduating seniors from the 2017 season. The ISS is comprised of three collegiate all-star games, two free-agent scout bowls, one national kicking championship and one pro-level combine. The game also serves as a free agent pipeline to North American and European Professional Leagues annually.