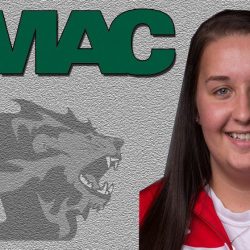 ANNVILLE, Pa. – After leading the way for an upset against the No.1 team in Division III last Friday, Albright senior women’s basketball player Devan Horka earned the MAC Commonwealth Women’s Basketball Player of the Week award announced on January 2 by the conference.

Horka scored a game-high 17 points along with eight rebounds and one assist in the upset win of No. 1 Tufts to open the Montclair State Holiday Tournament on Friday, December 29. She also played a key role down the stretch from the free throw line in the game by hitting 5-of-6 free throw attempts. Horka then posted her second double-double in three games the following day against Montclair State in the championship game. Against the Red Hawks, Horka tallied 15 points on 6-of-9 shooting from the field and 10 rebounds. She was also one of two Lions named to the All-Tournament team.

The Red Lion native now leads the team and ranks second on the team in scoring at 13.9 points per game and with 7.6 rebounds per game. This is the third time in her Albright career that Horka has earned player of the week honors, and second time this season. Albright now has won three in a row and five of the first seven women’s basketball player of the week honors in the MAC Commonwealth this season.

The Lions will return to action on Wednesday, January 3rd, returning to MAC Commonwealth play on the road against Hood at 8 p.m.