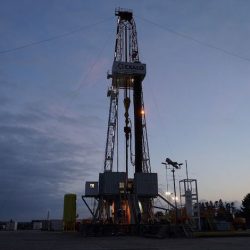 HARRISBURG, Pa. – Pregnant women living near fracked gas wells are more likely to have a low birthweight baby – that’s the finding in a new study from Princeton University. The researchers compared standard birthweight records collected by Pennsylvania hospitals with the locations of the parents’ homes. Low birth weight has long been considered an important indicator of later health problems. Princeton economics professor Janet Currie says they found a strong correlation – that the low birth weights were highly localized and much more likely to be found right next to the well sites.”What is surprising is, we found a fairly large effect for people living very close; but by the time you got to two miles away, we did not detect any effect,” she notes. The industry argues that air pollution from gas wells and equipment such as compressor stations disperses quickly after it’s released. The state Department of Environmental Protection is finalizing tighter regulations for emissions from new oil and gas facilities.But Patrice Tomcik, with Moms Clean Air Force, notes that the new rules don’t cover wells, compressor stations and pipelines already in service.”We need a solution for reducing the methane pollution from these existing sources that are sickening our families today,” she says. Emissions of methane, the main component of natural gas, also carry other pollutants including volatile organic compounds. Tomcik says about 1.5 million Pennsylvanians live within half a mile of oil and gas facilities.Beth Weinberger, a public health consultant with the Environmental Health Project, says previous research indicates preterm births and similar issues may be due to volatile organic compounds such as benzene, or small, soot-like particles such as those found in diesel exhaust, pollutants associated with drilling operations.”We know much of what’s in the emissions, and in each of the studies, the researchers have found associations between exposure to gas drilling and birth outcomes,” Weinberger says. The Princeton research suggests keeping drilling away from homes, through zoning or well set-back rules.