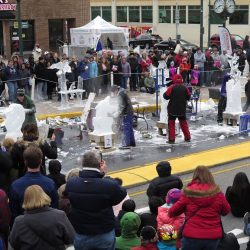 READING, PA – Three organizations and city officials have pledged more than $1.7 million to efforts to revitalize downtown Reading during the course of a new five-year strategic plan.

The funding includes $795,000 in grants from Berks County Community Foundation to continue the annual Reading Fire + Ice Fest (which takes place this coming weekend, January 12 and 13), the Downtown Alive free outdoor concert series, the Penn Street Market, and other economic development efforts over the next five years.

“The continued funding was contingent upon city officials and other stakeholders creating and supporting a vision for downtown Reading that capitalizes on the momentum we’ve seen in recent years to revitalize downtown,” said Kevin K. Murphy, president of the Community Foundation.

That vision was prepared by Aaron Gantz in her new role as Executive Director of Downtown Revitalization at the Greater Reading Chamber Alliance (GRCA). Gantz’s role comes from the commitment of the GRCA to downtown revitalization as part of the six strategic themes that guide the organization’s work – one of which is “Reading Matters.”

“We are happy to see so much interest in downtown Reading,” Mayor Scott said. “We always welcome those who want to work with the administration for positive change.”

Berks Alliance is a newer nonprofit supported by the leaders of many of the largest business and educational anchor institutions in the greater Reading area to assist improving the quality of life of Berks County residents.

“We have a strategic focus on the core of Reading, with a particular emphasis on revitalization in the 400 and 500 blocks of Penn Street,” Weidenhammer said. “Advocacy for Greater Reading is one of our most important contributions while we work on ensuring that the needs of our community are well understood in Harrisburg and Washington. During 2018, we will hold a series of community conversations to provide awareness of the strategies and tactics that other areas have used to achieve change.”

The $795,000 through 2022 from the Hawley and Myrtle Quier Fund of Berks County Community Foundation includes funding for Gantz in her new Downtown Revitalization role.

“The Greater Reading Chamber Alliance is pleased to be part of this collective effort to develop a strategic framework for moving downtown Reading forward,” Peers said. “We are particularly proud of this strategy as it represents a collaboration among several organizations in partnership with city government. GRCA is incredibly grateful to the Community Foundation for their continued support and financial commitment to downtown Reading revitalization efforts.”

Since 2014, the Community Foundation has awarded more than $600,000 to support the Fire + Ice Fest, the Downtown Alive concert series and the farmers market, as well as more than $125,000 to bring public arts programming to downtown Reading.

“As a key player in the revitalization of center city Reading, the Downtown Improvement District is extremely grateful to Berks County Community Foundation for its ongoing financial support of the Downtown Alive concert series and Reading Fire + Ice Fest, which the district has been instrumental in staging,” Broad said. “We look forward to working with the other entities involved in the five-year strategic plan to bring even more vitality and economic growth to the core of the city.”

The new funding agreement requires GRCA to submit reports assuring the Community Foundation that the goals in the revitalization plan are being met.

The plan has three major strategies:

The plan’s success will be measured by a series of indicators over the five-year period.