In the Galleries at GoggleWorks 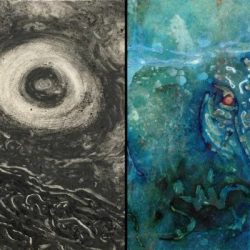 GoggleWorks Center for the Arts (GoggleWorks) presents the following exhibitions opening this Friday, from 5:30-7:30pm, during January Spotlight Night.

Peter Kinney studied art history at New York University, with studies in Italy, earning a Ph.D. in 1974.  As he was completing his degree, he shifted his interest and focus from art history to creative art, and independently explored drawing, painting, ceramics, and glass blowing as he taught at U. Arts and Moore College of Art in the early 1970s.  He began teaching art at the high school level at Haverford School in 1974, where he worked for 3 decades. Kinney was involved in the first Philadelphia Artists Cooperative exhibit in 1988, where the name Highwire was established due to the hanging of art from criss-crossed wires within the old synagogue on Bainbridge St. He was an integral member of Highwire throughout its duration, which ended in 2013. “Mudman” Kinney began using the earth itself as a painting medium in 1997. He collected interesting and colorful earth while he traveled, from New Jersey and Pennsylvania, and moving outward to Maine, Black Mountain NC, and the southwest, especially Utah. Peter Kinney passed away in September of 2017, while traveling in Maine.

Jeff Waring was born in Fall River, Massachusetts in 1963, and attended Rhode Island School of Design, graduating with a BFA in Painting in 1985. Upon graduation he traveled the US as a Domino’s Pizza sign painter, traveling cross-country while painting logos in new stores. Living out of a van, he developed small, collage paintings as a journal of place and time. This embedding of remnants and relics from travels continues to be a focus. Upon moving to Philadelphia in 1986, Waring married Jenny Quickel, began teaching at Haverford School with mentor Peter Kinney, and became active in the Highwire Artists Cooperative. In 1991 he began teaching at Westtown School and in 1997 moved to Media, Pa., where he continues to live and create. Waring draws inspiration from natural processes, earth cultures, improvisational music, outsider art and children’s art.

Amanda Lee Watkins was born in Reading, PA in 1991. She attended Temple University in Philadelphia, PA and obtained her Bachelor’s Degree in Art History in 2014. She finds inspiration in children’s books, including Edward Gorey. Watkins looks to meld innocent imagery with the darker tones of reality to mold hypothetical narratives. Her fiber artwork and weavings were exhibited in an exhibition titled Resurrecting Rust which she co-curated at PhilaMOCA in Philadelphia. Her illustrations appeared in the form of an installation at an exhibit called Watch Your Step at the Window Factory Arts, also in Philadelphia. Amanda has always excessively drawn. She currently resides in Williamsport, PA and works as an illustrator for a small publishing company located in San Jose, CA.

In-House: an exhibition of our students, work exchange, & renters

In-House is a showcase of the three groups of individuals who make up the creative heart of our communal teaching studios; students, who learn and grow under the guidance of our artist-instructors; work-exchange, who maintain and facilitate programming in exchange for studio space; and renters, who, working at all skill levels, call GoggleWorks home base for their studio practice. In-House will have a closing reception on Friday, February 2 during Spotlight Night.