Battle of the Badges XIII for the FirstStates Cup – Reading Police and Fire vs Allentown Squads on Feb. 18 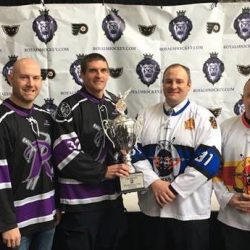 Immediately following the Battle of the Badges, the Royals host Wheeling at 4 p.m. One ticket gains entry into both games and a portion of every ticket sold from the game benefits the Battle of the Badges Scholarship Fund established to help the children of firefighters and police officers. Tickets to the doubleheader are available here, calling 610-898-PUCK (7825) or visiting https://royals.isportstix.com/order/group/Battleofthebadges2018/.

“We are excited to honor and help donate to our local heroes that play a vital role in the Reading and Allentown communities,” said Royals Chief Operating Officer and General Manager Ray Melcher. “The Battle of the Badges game is consistent with our commitment to honor those that make a positive impact. The Royals are a lot more than hockey. As strong as police and fire departments are is how strong their communities are – and the same could be said about education. That’s why the Battle of the Badges Scholarship Fund is essential.”

After the game on Feb. 18, the Royals host Faith and Family Night, a 4 for $44 Family Day (presented by Safe Berks, Berks Packing and Coca-Cola) and a Slapshot t-shirt giveaway to the first 1,000 kids, presented by Bethany Children’s Home.

“We’re all in to support and honor local policemen and firefighters, as they help make Reading and Allentown some of the most-fabulous places to live and work,” Melcher explained.

Why did the game begin?

The BOB Game began in 2006 as a benefit game played in remembrance of fallen Reading Police Officer Michael H. Wise II, who died in the line of duty in June of 2004, and Reading Police Officer Scott A. Wertz, who was fatally wounded in the line of duty in August of 2006.  The game also raises funds for the police and fire departments scholarship funds.

Last season, a high-scoring affair went Reading’s way, 7-6, against Allentown in the first-ever meeting between the respective towns’ fire and police departments.

In the historical matchup between the Reading Fire Department and Reading Police Department, Fire won the series 6-4-1.