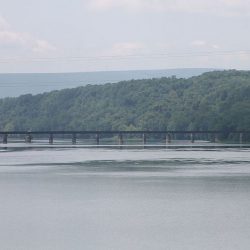 HARRISBURG, Pa. – The Department of Environmental Protection has agreed to a settlement to reduce toxic water pollution from 10 coal fired power plants. In settling a lawsuit brought by environmental groups, the DEP has agreed to a schedule to update and draft new water permits for the plants, that have been operating with expired permits. Discharges from those power plants include pollutants like arsenic, cadmium, lead and mercury that end up in rivers and streams. George Jugovic Jr., vice president of legal affairs at PennFuture, says federal law requires power plants to renew their permits every five years.”As those permits are renewed, the limits in the permits will be ratcheted down, meaning less pollutants will be discharged from the power plants as new technologies to control those pollutants become available,” says Jugovic.Under the settlement, the DEP plans to have permits for all 10 power plants finalized by March of next year.Larger rivers like the Susquehanna are sources of drinking water, and even smaller streams are used for recreational fishing. Jugovic points out that pollutants in power plant discharges can accumulate over time. “The fish in the streams ingest these pollutants,” he says. “They are stored in their fatty tissue, and then humans eat the fish and ingest those toxic pollutants.”Arsenic is a known carcinogen, mercury is highly toxic, and lead is especially harmful to children.Jugovic says coal fired power plants are among the most polluting industries in the state. While getting the DEP to enforce the requirements of the Clean Water Act won’t solve all the pollution problems, he sees it as a step in the right direction.”One of our prime objectives is to lead Pennsylvania into a clean energy economy, and one of the ways we do that is by holding dirty energy companies accountable,” says Jugovic.Plaintiffs in the lawsuit included the Sierra Club and the Lower Susquehanna Riverkeeper.