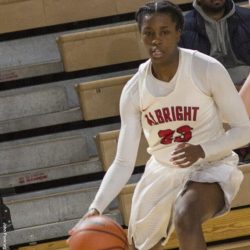 ANNVILLE, Pa. – After leading the team to an upset win on Saturday, Albright senior women’s basketball player Alysha Lofton earned the MAC Commonwealth Women’s Basketball Player of the Week award, announced on January 15 by the conference.

Lofton had no problem filling up the stat sheet this past week by averaging 15.0 points, 7.5 rebounds, 5.0 assists, 3.5 blocks and 2.5 steals per game, while also shooting 58 percent (11-of-19) from the field. She came up strongest for the Lions in their 63-54 win over nationally ranked Messiah on Saturday afternoon with a game-high 21 points, on 8-of-12 from the field, and perfect 5-of-5 from the charity stripe. Lofton also added eight rebounds, five assists, and two blocks to help move the Lions into a first place tie with the Falcons. She started the week with nine points, seven rebounds, five assists, five steals, and three blocks in a 64-53 road win over Lycoming.

The Central Bucks South graduate now ranks third among MAC Commonwealth teams in scoring with 14.4 points per game and is tied for fourth with 3.9 assists per game. Lofton also ranks 8th in the conference in rebounding at 7.6 per game, while ranking second in steals per game with 2.6 and first with 2.1 blocks per game. This is the fifth time in her Albright career that Lofton has earned player of the week honors, and third time this season. Albright now has won six of the nine women’s basketball player of the week honors in the MAC Commonwealth this season.

The Lions will return to action Wednesday, January 17 as they will travel to face cross-town rival Alvernia for an 8 p.m. tip-off.