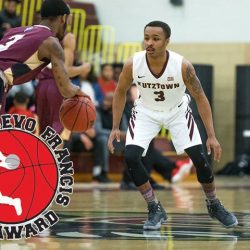 KUTZTOWN, Pa. – Kutztown University men’s basketball senior Ethan Ridgeway is one of just 100 players recently selected to the first 2018 Bevo Francis Award Watch List, an honor presented annually to the player who has had the finest overall season within Small College Basketball.

“The Bevo Francis Award has quickly become the most prestigious award for collegiate players at the small college levels, and this Watch List and award has now drawn a great deal of attention,” said Small College Basketball founder John McCarthy.

On February 15, SCB will publish the next Watch List with 50 players. The list will be narrowed down to 25 players in a Watch List published on March 15. The finalists will be announced in a highlight video that will be released on March 31.