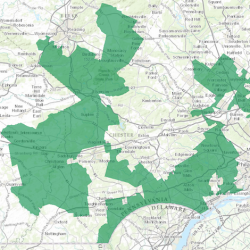 HARRISBURG, Pa. – The state’s highest court Wednesday heard arguments in a case that could redraw congressional districts in Pennsylvania. Eighteen Democratic voters, one from each of the state’s congressional districts, argued that the gerrymandering of their districts has been so extreme it deprives them of their right to fair elections. Pennsylvania is generally considered a “purple” state by political pundits. But according to Suzanne Almeida, executive director of the League of Women Voters of Pennsylvania, GOP candidates have had a consistent, unfair advantage since 2011 when Republicans redrew the map.”If you just look at the outcome over the last three election cycles, we’ve had a 13-to-5 split – Republicans to Democrats – regardless of what party registration looks like in any of those specific districts,” Almeida said.Republicans contend that Democrats are not prevented from supporting the candidates of their choice, and that courts have never established a limit on political considerations in drawing district lines.District lines drawn to favor one party are now being challenged in several states. Almeida said Pennsylvania’s congressional map is considered the most extreme example of political gerrymandering in the country.”These maps are drawn with the intent to ensure that one party who is in power stays in power,” she said. “And when that happens, that takes away the will of the voters.”One district’s lines are so convoluted it has been described as an outline of Goofy kicking Donald Duck.A federal court recently ordered North Carolina to redraw district lines after determining that political gerrymandering in that state violated the U.S. Constitution. Almeida said she believes such lawsuits are part of a resurgence of interest in democracy.”These challenges are a really great way for people to see how their votes have been manipulated and how their impact has been manipulated in elections,” she said.If the Pennsylvania court rules in favor of the plaintiffs, a new map would have to be set by February 21 for the May 15 primary election, or the primary could be delayed until the end of July. More information is available here.