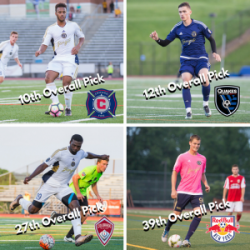 Four former Reading United A.C. standouts heard their names called at the annual draft, held at the Pennsylvania Convention Center in Philadelphia. The twenty-three clubs in the nation’s top professional soccer division selected the stars of tomorrow from a pool of the nation’s best collegiate players. Midfielders Mo Adams and Paul Marie were selected in the first round, while forwards Frantzdy Pierrot and Tom Barlow came of the board in round two.

Adams, a holding midfielder who played at Syracuse University, was the first United alum to go off the board when he was selected by the Chicago Fire with the 10th overall pick in the SuperDraft. The Fire engineered a trade with Real Salt Lake to put themselves in position to grab the former Reading United standout. Adams will now partner in the Chicago midfield with German World Cup champion Bastian Schweinsteiger and United States Men’s National Team star Dax McCarty.

Asked how his time with United factored into achieving his dream of playing professionally, Adams said, “Reading United played a big part. Going to a team that was an MLS affiliate was always going to help. I was looking for the pro experience and exposure. I think it set me up to be in the best possible position to be here.”

Two picks later, Paul Marie was selected by the San Jose Earthquakes as the 12th overall selection. Marie, who spent three seasons with Reading and is third on the club’s all-time goals scored list with 15 tallies, rocketed up the draft board after a superb performance at the MLS Player Combine in Orlando. The French midfelder, who played collegiately at Florida International University, will team up with fellow Reading alums Fatai Alashe and Jimmy Ockford in San Jose.

Frantzdy Pierrot was the next Reading standout to go off the board when the Colorado Rapids took the imposing forward with the 27th pick in the draft. Much of Reading’s offense ran through Pierrot in his two seasons with the club. Pierrot tallied 13 goals in 24 matches with Reading. The Coastal Carolina University standout, who was named the Sun Belt Conference Player of the Year, had 13 goals in his 24 matches with Reading.

The New York Red Bulls selected former Reading United forward Tom Barlow with the 39th overall pick in the draft. Barlow turned heads with his play at the University of Wisconsin, where he scored a Big Ten Conference leading ten goals in his senior season. The Wisconsin star last played for Reading in 2015, bagging five goals in 13 matches for United.