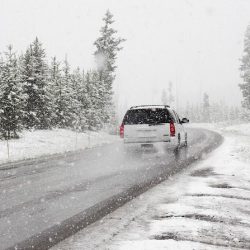 HARRISBURG, Pa. – The same salt that melts ice and snow on slippery roads and sidewalks can also harm vegetation, aquatic life and even humans, according to the Chesapeake Bay Foundation, which monitors the effects of road salt on water quality. Last year, the Pennsylvania Department of Transportation applied almost 900,000 tons of salt to state roadways. City and town road crews used thousands more, and individuals also use salt and other compounds on their driveways and sidewalks. While all that salt helps make icy roads safer, Harry Campbell, Pennsylvania executive director of the Chesapeake Bay Foundation, says it also alters the chemistry of groundwater, rivers and streams.”That has the potential to affect what lives in that stream, like brook trout or certain types of species that require fresh water – and not waters with high amounts of salt in them – in order to live,” he points out.Campbell adds that melting compounds sold to the public may contain toxic additives such as cyanide, so consumers should research products before buying – and then, use only as much as necessary.There are alternatives to salt that may lessen harm to pets or roadside vegetation. But Campbell points out that none is completely safe for the environment, and they can make their way into the drinking water supply.”The majority of Pennsylvanians get their drinking water from surface water sources, meaning the intakes to public water supplies are relying upon these very streams and tributaries to our major waterways that are being affected,” he explains.Though drinking water is treated, Campbell adds overuse and misuse of road salts can make treatment more difficult and more costly.And Campbell notes that, while salt is only applied to roadways during winter snow and ice storms, the huge amounts have a lasting impact.”These salts are changing the chemistry of these streams in the longer term,” he stresses. “These aren’t single event scenarios – these are changes that are being felt, even throughout the summer months.”Campbell acknowledges that roads salts are important for public safety, so the Chesapeake Bay Foundation recommends their wise use to reduce the harmful effects.