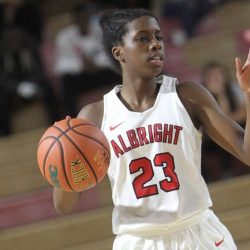 Lofton recorded the first triple-double in recent memory for the Albright women’s basketball team on January 27 with 15 points on 5-of-10 from the field, along with 11 rebounds and a career-high 10 assists. The 10 assists were the most in a game for a Lions player since 2011, and Lofton also added five steals. The 76-61 win over the Mustangs helped Albright become the first team this season to clinch a berth in the MAC Commonwealth Tournament.

Lofton started the week with a strong performance in the Lions 72-50 win over Arcadia in which she scored 16 points on 6-of-11 shooting from the field and seven rebounds.

Lofton continues to rank third among MAC Commonwealth teams in scoring with 14.7 points per game and is tied for third with 4.1 assists per game. She also ranks 7th in the Commonwealth in rebounding at 7.8 per game, while ranking first in steals per game with 2.8 and third with 1.8 blocks per game.

The Lions will return to action Wednesday, January 31 when they return home to face Hood for a 6 p.m. tip-off.