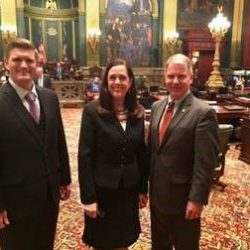 On January 6, 2017, the Pennsylvania Department of Corrections publicly announced the closures of two of five selected state correctional institutions located across the state.  A final decision for closures was set for January 26, 2017, leaving only twenty days to gather feedback from parties directly affected by these closings, including the institutions’ workforce, local governments and elected officials.

Senate Bill 748 establishes the Public Safety Facilities Act which ensures there is adequate notice and consideration of any proposed state correctional institution closures, as well as other structures that employ law enforcement staff. The bill requires specific notification requirements and the development of comprehensive strategies to minimize undue stress on employees and local communities.  The bill is modeled after a law passed in New York regarding a similar debate.

The prime sponsor of the bill, Senator David G. Argall (R-Berks/Schuylkill), mentioned his disappointment and concern when SCI Frackville was on the list of potential closures.  “When we heard the department’s announcement, our county delegation, state representatives, and senators in the area joined together to make the bipartisan case that closing this institution was not only unjustifiable, but it would have an adverse effect both financially and on the public safety of the community and its residents,” Argall said.

Argall also noted that many local residents reached out to them to voice their concerns about the negative impact the closure would personally have on them. A petition which urged the governor and Secretary Wetzel to keep the facility opened was signed by 5,670 local residents.

Senator John Yudichak (D-Luzerne/Carbon) and Senator Lisa Baker (R-Luzerne/Pike/Susquehanna/Wayne/Wyoming), both co-sponsors of Senate Bill 748, also fought to save correctional facilities in their areas that faced the potential threat of closing.  SCI Retreat is located in Senator Yudichak’s district and SCI Waymart is located in Senator Baker’s district.

While all three state correctional facilities remain open, future prison closures across the state remain possible.  Argall believes that with the committee’s passage of Senate Bill 748, the process for prison closures can be better streamlined.  “Senate Bill 748 allows local residents to be a part of the decision-making process and helps local officials, as well as the Department of Corrections, to comprehensively identify the potential impact that closing a state correctional facility would have on our communities.”

Senator Yudichak praised the committee’s passage of this important initiative. “Empowering citizens to have their voices heard in Harrisburg is always a good idea, and Senate Bill 748 simply ensures the voice of local citizens is heard before a state prison is closed in their community,” said Yudichak.

The bill will now move to the full Senate for consideration.