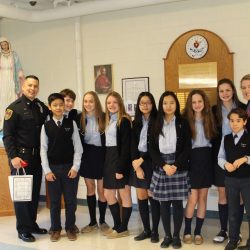 Members of the St. Catharine of Siena School community of Mount Penn, thanked local police, firefighters, EMT workers and other community volunteers, including bus drivers and crossing guards, with tokens of gratitude for always going the EXTRA mile!

St. Catharine of Siena, along with other Catholic schools in the area, is celebrating Catholic Schools Week, a celebration of Catholic education in the United States sponsored by the National Catholic Educational Association. This year’s Catholic Schools Week theme is Learn, Serve, Lead, Succeed, and the theme of the day for January 29 was “Celebrating Our Community.”  Kindergarten teacher, Mrs. Cheryl Scheirer, coordinated the community volunteer gift project.

With a 75+ year history in the community, St. Catharine of Siena School, headed up by Principal, Mrs. Marcella Kraycik, is proud of its tradition of educating the future leaders of the community. In fact, one of St. Catharine’s own alum, Matt Stairiker, from the Lower Alsace Ambulance Association stopped by to talk with several of the school children and accept the EXTRAordinary gifts on behalf of his colleagues.

Officer Taimanglo from Central Berks Police Department stopped by to greet members of the Student Council, along with their moderator, Mrs. Taylor Serafin.

Several members of the Mount Penn Fire Company also stopped by to say hello to few starstruck first and second graders. After lots of thank you’s and smiles, the question most pressing for the youngsters? “Have you gotten to meet Santa Claus?” The firefighters pointed outside to the truck they’d just arrived on. “Yes! We drove him around town on that very truck!”

For more photos, check out St. Catharine of Siena on Facebook (@SaintCatharineOfSienaSchool).