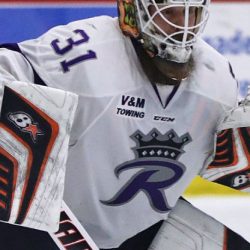 Reading Royals goaltender Mark Dekanich is the CCM ECHL Goaltender of the Week for the week of Jan. 29-Feb. 4.

This marks the third time in five weeks a Reading netminder has won the award – John Muse took Goaltender of the Week twice in January and was named Warrior Hockey Goaltender of the Month for January. Reading has received four weekly awards this season.

Dekanich went 2-0-0 with one shutout, a 0.51 goals-against average and a save percentage of .980 in two appearances against Norfolk last week.

A native of North Vancouver, British Columbia, Dekanich is 10-13-1 in 25 appearances with the Royals this season with a 2.94 goals-against average and a save percentage of .910.

Prior to turning pro, Dekanich played four seasons at Colgate University where he set school records for games played (118), saves (3,071) , save percentage (.923) and shutouts (11).