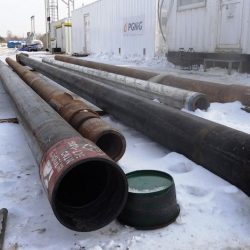 PHILADELPHIA – Clean air and water advocates are angry that the Department of Environmental Protection has lifted its suspension of permits for the Mariner East 2 pipeline. The construction permits were suspended in early January for what the DEP labeled “willful and egregious” violations. But on Thursday, the DEP announced that construction can resume after Sunoco, the pipeline builder, agreed to a $12.6 million civil penalty, and a stringent compliance review. Joseph Minott, executive director of the Clean Air Council, calls that too little, too late.”If DEP had issued the permits properly in the first place, if DEP had done enforcement and monitoring all along, we would not have had the disaster that is the Sunoco Mariner East 2 pipeline,” says Minott.Sunoco says it is committed to complying with the terms of the agreement and considers safety a top priority.In a statement, DEP Secretary Patrick McDonnell said the Department will continue to monitor and enforce the conditions of the permits and take actions when violations occur. But Minott says past performance is hardly reassuring.”DEP did not discover the numerous violations that Sunoco was guilty of. That was done by groups like the Clean Air Council, and by the residents living next to where the pipeline was being built.”He says prior to the permit suspension, construction had caused more than 120 drilling fluid spills and contaminated dozens of drinking water supplies, streams and wetlands.Minott feels that too much of the process for lifting the permit suspension happened behind closed doors.”DEP really should have reached out to the community,” he says, “to see what the community felt DEP needed to do better, before they entered into an agreement with Sunoco.”Work on the pipeline resumed Thursday morning.