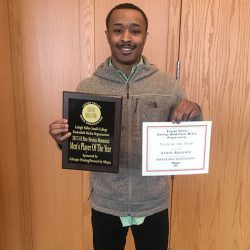 The Team of the Year recognizes student-athletes from six local colleges in the Lehigh Valley area – Kutztown, Moravian, Muhlenberg, DeSales, East Stroudsburg and Cedar Crest – for their athletic accomplishments during the season.

Ridgeway is a first-time honoree on the Team, and gives KU its first award winner since Stephen Dennis in 2010, who capped off a stretch of five straight Kutztown winners with Dave Ben winning the three years prior and Bruce Hall receiving the honor in 2006. Ridgeway also ended a run of five straight years that a Warriors player has taken home the award.

The Player of the Year award was renamed in 2007 in honor of Pete Nevins, ESU’s sports information director from 1969-2002 and the founder of the small college basketball organization.

There were 11 players selected on the organization’s “Team of the Year.” Joining Ridgeway on the men’s side was Kweku Dawson-Amoah (DeSales), Steve Harris (ESU), Jimmy Murray (Moravian) and Nick Rindock (Muhlenberg). For the women, KU freshman Rylee Derr was on the team, joined by women’s player of the year Brandi Vallely of Muhlenberg, Morgan Birmelin (DeSales), Imani Brown (ESU), Camille McPherson (Moravian) and Sylera Weller (Cedar Crest).

Ridgeway has helped the Golden Bears (16-5 overall, 12-5 Pennsylvania State Athletic Conference) in more ways than one on the offensive end of the floor. He is second on the team, averaging 17.9 points per game (ppg). His 1,200 points is 16th all-time in program history. He also has a knack of sharing the ball. His 642 career assists is fifth all-time in PSAC history, and also ranks fourth in NCAA Division II among active career assist leaders. He has 8.0 assists per game, second in Div. II.

Assistant coach Tom York introduced Ridgeway and described his senior point guard as a ‘tough player’ and someone he would want to go into battle with, referring to Ridgeway’s high school days as a prominent football player at Bayard Rustin High School.

The KU men have clinched a spot in the PSAC tournament for the fifth consecutive season and for the 15th time in the last 16 seasons.