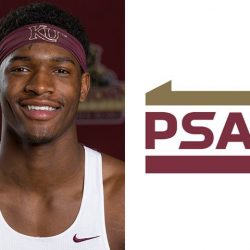 KUTZTOWN, Pa. – In addition to getting his name inscribed on the Kutztown University record board in Keystone Hall, senior Jhaloni Johnson was recognized by the conference office on Feb. 13 as this week’s Pennsylvania State Athletic Conference (PSAC) Track Athlete of the Week.

Johnson broke an 18-year school-record in the 200m Friday night at the Fastrack National Invitational in Staten Island. He won his heat and finished in second place in 21.72 seconds, breaking Keith Crowell’s record from 2000 by .06 seconds.

It is Johnson’s second school-record along with the outdoor 4x100m relay. It was also an NCAA Provisional mark, the first of the year for Johnson.

This season, Johnson ranks third in the PSAC in the 200m, eighth in the region and 34th in Division II.

Johnson and the Golden Bears return to action on Friday, Feb. 16, when they close out their regular season by hosting their Last Chance Qualifier at O’Pake Fieldhouse beginning at 5:30 p.m.