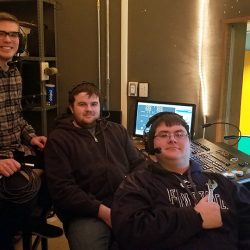 Engineering students, minoring in Theatre, are recognized at KCACTF

While majoring in Engineering and minoring in Theatre may seem like an odd combination at first, three Penn State Berks Engineering students with Theatre minors, find that it is opening doors for them in unexpected ways. They recently had the opportunity to expand their technical knowledge by participating in the 50th Annual Region 2 Kennedy Center American College Theatre Festival (KCACTF) hosted by Indiana University of Pennsylvania in January.

The trio also was involved in the Penn State Berks productions of Macbeth and The Pavilion that were entered in this year’s KCACTF. Bush was nominated to participate in the Design, Management and Technology Design event for his sound design for Macbeth.

Bush, Bonham and Smith all said they were inspired to become involved in theatre based on their high school experiences with sound and lighting. Bush, one of the college’s first Engineering majors with a Theatre minor, is also in charge of sound and lighting for Campus Life events at the college. He states that he is exploring full-time work with professional sound companies like Clair Brothers, Manheim, Pa., and Tait Towers, Lititz, Pa.

Penn State Berks is the only Penn State campus that offers a B.A. in Theatre with concentrations in acting, design/tech, directing, management/administration, and theatre studies. Design/tech students can choose from lighting, sound, scenery, or costume design. The college produces four productions per academic year–two each semester–offering students a wide variety of experiences.

Jim Brown, Berks Theatre Program Coordinator, states, “I would like for the engineering students to realize there is an opportunity to double major in Engineering and Theatre, or to minor in Theatre, since there are many design and technical jobs in theatre, film, and television production for people with those skills.

“Engineering students bring a rigorous thought process to their tasks in the design areas and in the technological execution of the design,” Brown emphasized.

“Regional festivals have workshops and activities that specifically target acting, design, technology, playwriting, directing, dramaturgy, criticism, and other areas,” explains Brown. “Students from each area are able to participate in events led by highly qualified faculty and professionals and are exposed to teaching that either reinforces what they get at their own college or techniques that are not available to them.

“Students participating in the regional festivals should learn enough to come back to their home institution with a set of objectives that drive their course and practical theatre work for the next year,” said Brown.

Brown said his personal festival favorite this year was a set of workshops that led students through the process of creating a not-for-profit theatre company.