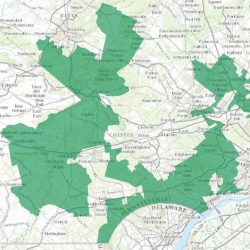 PHILADELPHIA – State and national Republican Party leaders say they will head to federal court this week in order to challenge the congressional district map released by the state Supreme Court on Monday. Last month, the court found the 2011 district map was drawn to unconstitutionally favor Republicans. Since that year, despite the state being pretty evenly divided between voters of both major parties, Republicans have won the same 13 out of 18 districts. The court said a new, less partisan map had to be drawn or the court would issue one itself. Republicans now maintain that by redrawing the districts’ map, the court has taken authority that rightly belongs to the legislature. Mimi McKenzie, legal director of The Public Interest Law Center, disagrees.”The legislature had its chance,” she states. “They didn’t do that, and there’s certainly decades and decades of precedents for the court to step in and do this now.”Gov. Tom Wolf had rejected a new district plan drawn up by state legislators, saying it was just as politically gerrymandered as the 2011 map.McKenzie points out that following the ruling that the old map was unconstitutional, state GOP lawmakers tried to appeal to the U.S. Supreme Court.”Justice (Samuel) Alito denied any attempt to stay the Pennsylvania Supreme Court,” McKenzie stresses. “So there really is no basis for them to be going back into court challenging this new map.”On Tuesday, President Donald Trump weighed in on the side of Republicans, urging them to continue fighting.The new district maps will be applied to the May 15 primaries. McKenzie says the governor’s office is confident that can still happen.”Election officials told both the court and the public that if a new map was put in place by Feb. 19, they would be able to run an orderly and efficient election on the schedule that we’re on,” she points out.Next week, candidates will begin circulating nominating petitions for the May primary.