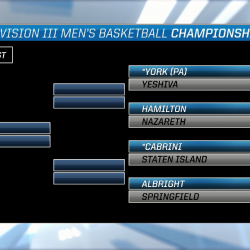 INDIANAPOLIS – The Albright men’s basketball team learned that its season will continue into the NCAA Tournament as the Lions earned an at-large bid during the unveiling of the bracket on Monday. Albright will face Springfield College in a neutral site game hosted by Cabrini College on Friday, March 2.

Albright (20-6) earned the program’s first at-large bid since 1980. The Lions did it with a strong schedule that includes wins over two ranked opponents. The Lions reached the MAC Commonwealth Championship game for the second straight season, losing a hard-fought battle with Lebanon Valley, 70-68. Albright sports the MAC Commonwealth Player of the Year in DeJuan Smith and the Coach of the Year in Rick Ferry.

Springfield (18-8) lost in the NEWMAC Championship semifinal on Saturday to WPI, 84-80, in overtime. Springfield is led by sophomore Jake Ross. He averages 24.3 points per game, and as a freshman in 2016-17, he was named the D3hoops.com National Rookie of the Year.

Cabrini (24-3) will serve as the host for the first two rounds and will play Staten Island (16-12) in the other first round game on Friday night.