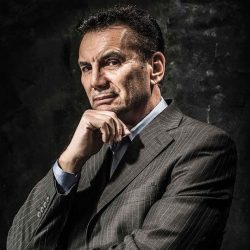 Former mob boss Michael Franzese will speak about his life in organized crime at Penn State Berks on March 21, 2018, at 7 p.m. in Perkins Student Center Auditorium. This event is free and open to the public.

Franzese grew up as the son of the notorious Underboss of New York’s violent and feared Colombo crime family. He made his own mark, generating an estimated $5 to $8 million per week from legal and illegal businesses. In 1986, Vanity Fair named Franzese one of the biggest money earners the mob had seen since Al Capone. At the age of 35, Fortune Magazine listed him as number 18 on its list of the “Fifty Most Wealthy and Powerful Mafia Bosses.”

Despite his success, he wanted to make a change and today he is the only high ranking official of a major crime family to ever walk away, without protective custodies, and survive. Determined to use the compelling experiences of his former life for the benefit of anyone seeking the inspiration to beat the odds and make positive changes in their lives, he has become a highly regarded motivational speaker and a source of invaluable information.

He speaks about how he engaged bankers, corporate executives, union officials and professional and student athletes in a wide variety of financial scams. His open and honest true stories of his personal experiences in organized crime captivate audiences.

This event is sponsored by the Penn State Berks Arts and Lecture series.