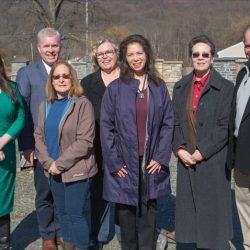 Boyertown, PA – To mark National Invasive Species Week, the Pennsylvania departments of Agriculture and Conservation and Natural Resources, along with representatives of the Governor’s Invasive Species Council visited Rolling Rock Building Stone today to demonstrate the crucial role businesses can play in stopping the spread of Spotted Lanternfly — a destructive pest that threatens agricultural commodities and the export of all goods.

“Last fall, Berks County and 12 other southeastern Pennsylvania counties saw just how destructive Spotted Lanternfly could be as the pest multiplied exponentially in their yards, on trees, and on vines,” said Agriculture Deputy Secretary Fred Strathmeyer. “That destructive potential is multiplied further by the ability of this invasive pest to lay eggs and hitchhike on vehicles and cargo, threatening commerce of agricultural and non-agricultural products alike.

“Businesses like Rolling Rock Building Stone are integral to helping stop the spread of this pest. By investing time and personnel to inspect vehicles and shipments for eggs and changing the way they do business to safeguard against transporting insects, businesses can do a great deal to ensure this pest does not reach further beyond those counties that are already quarantined, helping to protect commerce and our ability to access other markets,” added Strathmeyer.

Spotted Lanternfly jeopardizes $18 billion worth of Pennsylvania agricultural products, such as apples, grapes and hardwoods. If the state cannot contain or eradicate the pest, it threatens exports to other states and countries that do not want the insect to cross their borders.

When this pest was discovered in South Korea — a nation only slightly smaller than Pennsylvania — it enveloped the entire country within three years. In contrast, since it was first discovered in the U.S. in Berks County in 2014, it has spread only to 13 Pennsylvania counties covering approximately 3,000 square miles. Those counties have been placed under quarantine, restricting movement of materials to prevent transporting insects.

The Department of Agriculture’s Bureau of Plant Industry has also engaged in extensive surveillance and eradication efforts, and it has worked with businesses and residents to ensure they are doing their part to prevent its spread.

Governor Tom Wolf proposed nearly $1.6 million in dedicated state funding to combat the Spotted Lanternfly as part of his fiscal year 2018-19 budget plan. If approved, this funding will supplement $17.5 million in federal funding announced earlier this month by the U.S. Department of Agriculture.

“From the early onslaught of the gypsy moth in our oak stands, to the most recent emergence of the Spotted Lanternfly threatening our maples, invasive species have become one of the most significant threats to native ecosystems in our state parks and state forests,” said DCNR District Forester Joe Frassetta. “We have established an agency-wide Invasive Species Team to meet this pervasive threat to our woods and waters, and we find desperately needed support in Governor Wolf’s declaration and support of National Invasive Species Week, and his proposed dedicated funding to combat the Spotted Lanternfly.”

Governor Wolf signed an executive order in December 2017, expanding the Governor’s Invasive Species Council. The order brings new resources and expertise to bear on protecting Pennsylvania from invasive plants and insects such as the Spotted Lanternfly and Tree of Heaven, which the insect needs to complete its lifecycle.

Find out more about Spotted Lanternfly at agriculture.pa.gov/spottedlanternfly.