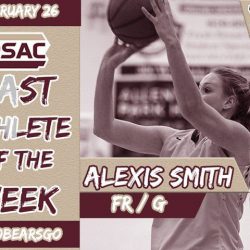 Smith dropped 25 in style in just 20 minutes off the bench, making a total of seven three-pointers on eight attempts, tying teammate Rylee Derr’s freshman and school-record set earlier this season on Jan. 17 versus Cheyney. This was a season-high for the freshman and the most points a Golden Bear has scored this season, eclipsing her own total of 24 points from Nov. 25 against Penn State Lehigh Valley.

In the Maroon and Gold’s win over ESU three days earlier on Feb. 21, Smith scored 13 points, making 2-of-3 attempts from distance and going 5-for-8 from the field. The Central Dauphin-prep is shooting 81.4 percent from the free throw line this season, ninth in the PSAC. Smith has also made 1.7 threes per game, 15th in the PSAC, shooting 38.2 percent from deep.

The freshman from Dauphin averaged 19 ppg, 4.5 rpg and 4.5 made three-pointers per game, playing an average of just 21.5 minutes per game in KU’s two wins over East Stroudsburg and Lock Haven this past week.

This is the second PSAC athlete of the week honor for Smith, last winning on Nov. 27, and the fourth overall for the KU women’s basketball program. Keifonna Ferguson earned the same honor on Dec. 4 and Derr claimed the freshman of the week award on Jan. 22.