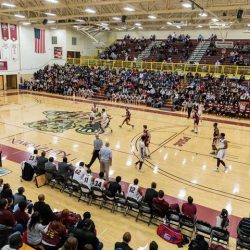 It is the second straight first-team recognition for Ridgeway, and third all-conference honor for Lee, who was named to the second-team his first two seasons. Williams, who is a five-time PSAC East Freshman of the Week award winner this season, gives KU its first Freshman of the Year winner since Ryan Washington during the 2007-08 season.

The Golden Bears (21-7 overall) won their first round PSAC tournament game over Bloomsburg last Monday, Feb. 26, but fell in the quarterfinals to top seed East Stroudsburg Wednesday. Kutztown will now wait to see if it will qualify for the NCAA Atlantic Regional Tournament, which begins next Saturday, March 10. The NCAA Selection Show is set for Sunday, March 4 at 10:30 p.m.

For the second year in a row, Ridgeway has earned a spot on the PSAC First-Team. He leads all of Division II at 8.2 assists per game. He is the school-record holder for assists in a game (16), season (260) and career (687). His 687 career assists ranks third all-time in PSAC history, and is fourth among active players in Div. II.

The West Chester native has started 27 games this season, and is second on the team, averaging a career-high 17.4 points per game. He has 1,271 career points, which is 13th all-time in program history. He has made 374 career free-throws, second all-time at KU. He has nine double-doubles on the year, the most in his four years at KU.

This is the third time in three seasons that Lee has been named to an All-PSAC team, the first year being named to the first-team. He has been a lights-out shooter on the court this season, breaking the school-record for made three-pointers in a game with eight, and in a season with 83. He is leading the PSAC in made three-point percentage at 51.6, which also ranks second in Div. II, and is also fifth in the conference in field-goal percentage (54.1) and free-throw percentage (86.8).

The Willow Grove native has totaled 1,470 career points, ranking him sixth in program history. He is third in the PSAC in scoring (21.5 ppg), and has scored in double-figures in 74 of his 82 career starts, including all 28 this season.

Freshman of the Year – Moe Williams

Williams has been a regular on the PSAC weekly awards with five Freshman of the Week honors this season. He is third on the team in scoring (10.9 ppg) and is sixth in the PSAC in rebounds per game (8.7). He is also in the top-10 in the conference in blocks per game (1.0).

The Townsend, Del. native has tallied seven straight double-doubles in KU’s last seven games, and has totaled nine on the season, the most for a KU player in at least 20 years. Williams had a career-high 20-point, 10-rebound effort in the PSAC First Round win over Bloomsburg last Monday. He has averaged 34.8 minutes per game over the last 10 games.

The Kutztown University men’s basketball team has had at least three representatives on all-conference award lists for the last four seasons.