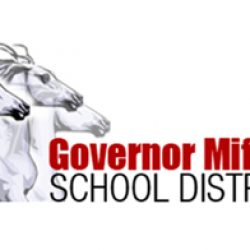 SHILLINGTON, PA – When the pit orchestra plays the first few notes of this year’s Spring Swing production of Into the Woods, the audience will hear an anxiously staccato beat of music that invokes a feeling of anticipation and excitement. Fitting, as this year’s show, a modern classic adapted from Grimms’ Fairy Tales, is clad in a similar ardent energy. Before the curtain rises, the cast of Into the Woods has already made it into the record books. Governor Mifflin’s 60th Spring Swing musical is the longest-running continuous musical in Pennsylvania and the second longest-running along the east coast.

“It’s pretty cool that this sort of legacy has been passed down for so many years,” said cast member Christopher Angstadt.

The upcoming production will be Angstadt’s fourth and last at Governor Mifflin before he graduates in June. He and the cast of 56 other students have spent nearly every day since December rehearsing the challenging score of Into the Woods. The show’s director, Alison Clark, chose the show knowing she had a cast with the chops to tackle the ambitious production.

“Vocally and instrumentally, this show is not easy,” said Clark. ”With the level of talent we have, they can handle it and they’ve risen to the task.

Governor Mifflin’s Spring Swing did not start out as a celebrated event for the district. When two local teachers and musicians, Bob Cooper and Nick Geracimos, announced they were planning to bring Broadway’s Oklahoma! to the high school stage, the community response was lukewarm at best. However, after the show debuted in 1959, sentiment quickly changed and the outpouring of community support helped solidify a new tradition.

Jeff Cusano was on the stage crew for the 40th Spring Swing his senior year. At the time, Cusano already had a long history with the show. He started playing in the pit orchestra while in middle school and then became part of the stage crew, focusing on lighting and sound design. Cusano credits the experience for his professional career path. He continued to work in theatre lighting and design. In 2011, he started Arethusa Designs, a company that provides professional lighting schemes for events and productions. He has also returned the favor by producing 22 of the past 27 Spring Swing productions, including the upcoming Into the Woods.

“I look at it like honoring those who started this production and taught me and put me on track to my professional theatre career,” said Cusano.

Tickets are currently on sale for Governor Mifflin’s Spring Swing production of Into the Woods, March 23, 24, and 25. Tickets can be purchased online by visiting the Governor Mifflin website: www.governormifflinsd.org.