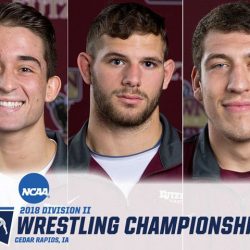 KUTZTOWN, Pa. – The Kutztown University wrestling team will send three Golden Bears, all of whom are returning national qualifiers, to this weekend’s NCAA National Championships, hosted on March 9-10 at the US Cellular Center in Cedar Rapids, Iowa.

Austin Petril, Jeff Reimel and Ryan Appleby will represent KU at nationals this year, the second-straight year for Petril and Reimel and third for Appleby. 2018 will be the 26th consecutive season Kutztown will be represented at the National Championships.

Petril makes his second appearance at nationals at 125 pounds after earning All-America honors in his first try last year with a fourth-place finish. He wrestled in the national semifinal match last year and won a career-high 23 matches. This season, Petril debuted in December and has posted a 14-7 record and finished fourth at regionals. He enters his final weekend in the Maroon and Gold with 55 wins, just cracking the top-25 in school history.

In the first round, Petril will face Elijah Hale of Central Oklahoma, the West Region champion and a senior transfer from Oklahoma State, who is 20-0 this season.

Reimel makes his second career nationals appearance. He will compete at 184 this year after wrestling at 197 last year. Reimel has been one of KU’s most dominant wrestlers of late, posting a 14-8 record and winning eight of his last nine matches. He leads the team with five pins and four major decisions, and enters nationals ranked a career-high ninth in Division II.

In the first round, Reimel will face senior Tyler Hughes of Lake Erie, the third-place finisher at the Super Region 2 Championships, who is 29-8 this season and makes his second national appearance.

Appleby competes in his third National Championship and returns as a 2017 All-America honoree at heavyweight. He finished eighth at nationals last year and has returned this year as one of the nation’s best. He is 19-6 this year and has been one of Division II’s best with seven tech. falls. Appleby finished fourth at regionals and enters his final collegiate weekend with 62 career wins, 16th in school history.

In the first round, Appleby will face sophomore Jarrod Hinrichs of Nebraska Kearney, the West Region champion who is 38-7 this season and enters his first National Championship.