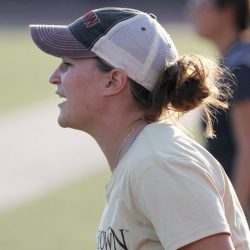 “Amber is an outstanding young coach that is more than ready to take on her own program,” said head coach Marci Scheuing. “She was an integral part of our coaching staff at Kutztown for five years and will be missed, but we know she will do great things at Cedar Crest College.”

Auchenbach spent five years on the KU coaching staff under Scheuing and helped increase KU’s win total during her first three years, including a 2015 playoff appearance. The Golden Bears finished the 2017 season with an 11-7 record, with six of the seven losses coming by just one goal.

Auchenbach came to Kutztown after an All-America career at Bloomsburg University. She was a second team selection in 2012 and was a two-time All-American midfielder at Bloomsburg. She played a significant role for the Huskies in her freshman season to help Bloomsburg win the Division II National Championship.

She was a three-time All-Pennsylvania State Athletic Conference (PSAC) team member, being named first-team her junior and senior seasons and second-team as a sophomore. She scored a career-high 11 goals during her senior season and finished 2012 with 29 points. Her seven assists were a top-10 mark in the conference as well. For her career, she registered 20 goals and 18 assists as a four-year member of the Huskies.