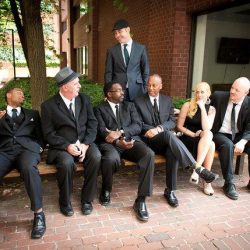 Featured Bands will include The Uptown Band, The Groovemasters,The Smokin’ Soles Dance Band, and DJ Benjamin Smith from 5 Star ProductionsA portion of this year’s proceeds will again benefit the Alisa B. Anderson Memorial Scholarship Fund with the Reading Musical Foundation and a Go Fund Me for one of our best musical supporters and close friend Greg Brown, who is battling an aggressive form of Brain Cancer. Anderson was a member of The Groovemasters for years and passed away a few years back from stomach cancer.On Friday March 30, 2018, the Shillington-based Uptown Band will be presenting its 7th Annual “Bandapalooza” at the Crowne Plaza Hotel Ballroom in Wyomissing PA to celebrate the group’s 12th Anniversary. After an extremely successful last six years with over 750 guests at each gala (over 900 at some) The Uptown Band will again be joined by The Groovemasters featuring Bennie Sims and Cliff Starkey, and new to the event this year, The Smokin’ Soles Dance Band and DJ Benjamin Smith from 5 Star Productions.Since the band’s inception during the Berks Jazz Fest 2006, The Uptown Band has become one of the busiest bands in the Northeast. With the release of their debut original CD “Waiting for Her” and sophomore release “Heart, Soul, Body, & Mind”, they have grown beyond their regional roots and have become known nationally and internationally. TV-wise, they have performed twice on NBC New York’s Late Night talk show “All Night With Joey Reynolds”. In addition to having their own listing on Pandora Radio, the group’s songs can be heard on the national cable system Music Choice and DMX Satellite Radio. The band’s last release I Can Breathe peaked as high as #3 on New Music Weekly’s HOT AC Chart above industry heavyweights Taylor Swift, Gwen Stefani, and Coldplay. Due to the success of I Can Breathe, New Music Weekly nominated them for “BEST NEW ADULT CONTEMPORARY GROUP” at their annual awards show in 2016. Stirring up an explosive, melodic and grooving mix of Jazz, Funk, Rock, and Pop, The Uptown Band has headlined hundreds of shows and numerous charitable functions. The band’s leader, Erich Cawalla and his Jazz Quartet will be performing as part of the Berks Jazz Festival with the Reading POPS Orchestra on April 8.In many ways, The Uptown Band and The Groovemasters are tightly knit at the seams. Besides being the leader and visionary of The Groovemasters, Bennie Sims serves as both The Uptown Band and its leader, Erich Cawalla’s original music producer. Along with Cliff Starkey, they have performed for numerous celebrities including President Bill Clinton, Dizzy Gillespie, The Temptations, Al Jarreau, Tower of Power, and Tavares to name a few. Their talents have been showcased nationally on “Good Morning America’, “The Emeril Live Show” (where Cliff served as the house piano player for 9 years and appeared on the Rachael Ray Show in 2016), and on a 2002 PBS Special called “Love, Rhythm, & Soul” featuring Aretha Franklin, Lou Rawls, and The Spinners. Sims was the musical director for The Three Degrees. Both continue to perform nationally and internationally with these and many other artists. Sims has also written and performed with Smooth Jazz Legends Pieces of a Dream. The Groovemasters will be performing as part of the Berks Jazz Fest Kickoff for their 27th straight year at the Peanut Bar on Friday, April 6 & and the next Friday, April 13.The Uptown Band and Groovemasters are excited to perform with the Smokin’ Soles Dance Band featuring the soulful Boisey Sawyer. DJ Benjamin Smith of 5 Star Productions will serve as the DJ between bands.Tickets are available ahead of time by emailing [email protected]  or at the door. Limited Reserved Seating is almost sold out. Doors open at 6:30 and the event runs from 7:30 PM – 12:30 AM. Bands will alternate sets starting with The Smokin’ Soles, The Uptown Band, The Groovemasters, and a final set from The Uptown Band.