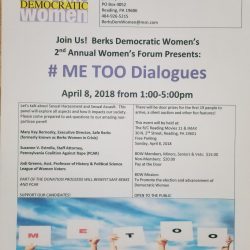 On Sunday, April 8, 2018 from 1:00PM until 5:00pm at the IMAX Theater, 30 North 2nd Street in Reading, the Berks County Chapter of the Pennsylvania Federation of Democratic Women (PFDW) will hold its Second Annual Women’s Forum. Open to the Public. Inspired by the #metoo movement:

“# ME TOO Dialogues” will be the topic for the non-partisan panel discussion that will include panelists: Mary Kay Bernosky, Executive Director, Safe Berks (formerly known as Berks Women in Crisis); Suzanne V. Estrella, Staff Attorney, Pennsylvania Coalition Against Rape (PCAR) and Jodi Greene, Asst. Professor of History & Political Science at RACC, League of Women Voters.

The panel will explore all aspects of how Sexual Harassment and Sexual Assault impact our society especially in the workplace. The cost is $15 for BDW Members and all Minors, Seniors and Vets and $20 for Non-Members. In addition to the panel discussion the event will include door prizes for the first 19 people, a silent auction, light refreshments, PA and Congressional candidates and more! A portion of the donations will benefit PCAR and Safe Berks.

A portion of the proceeds will benefit the Pennsylvania Coalition Against Rape (PCAR) and Safe Berks.

In 1927, the Pennsylvania Federation of Democratic Women Inc. was founded to promote the appointment and election of Democratic women to responsible positions within all branches of government, to encourage the advancement of women in both the public and private sectors, to advocate the principals of the Democratic party.