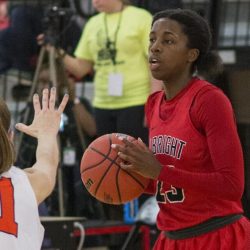 She played a major role in leading the Lions to their third consecutive NCAA Tournament appearance, and fourth straight MAC Commonwealth Tournament Championship Game appearance. Lofton found herself in the top 10 in five major statistical categories in the conference. She led the conference with 2.7 steals per game, ranked fourth with 14.4 points per game and 1.6 blocks per game in addition to placing fifth with 3.7 assists per game, and seventh with 7.6 rebounds per game. Lofton also posted five double-doubles during the season.

Lofton was named MAC Commonwealth player of the week four times this season, and recorded the programs first triple-double against Stevenson on January 27th. She will finish her collegiate career with 1,012 points, and ranks in the top-five in Albright history for career assists and blocks.

This is the 17th year D3hoops.com has named an All-Region team and this year’s All-America team will be the 21st annual All-American selections. The D3hoops.com All-American teams, along with those of the respective coaches’ associations, are the only ones recognized in the NCAA record book.