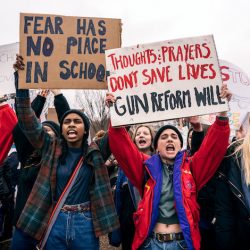 HARRISBURGH, Pa. – Adding police patrols and arming teachers won’t make schools safer – that’s the message some education advocates took to legislators on Thursday. The day after students walked out of classrooms across the country to demand safe schools and gun control, Pennsylvania’s House Education Committee held a hearing on school safety. Reynelle Brown Staley, policy attorney with the Education Law Center, says the committee is considering 26 separate bills, many proposing ideas that have already been tried and abandoned in other states. For example, she says after Columbine, schools in Colorado brought in police and metal detectors.”What they found was that there were a lot of students who were being arrested for minor misbehavior, students who were being pushed out of school,” she says. “And there was actually a declining sense of safety in those schools.”In contrast, she says, fostering a school climate that is supportive of all students and attentive to those experiencing trauma can reduce violence.Staley points out that in other states, over-policing of schools has had a disproportionate impact on children of color, children with disabilities and L-G-B-T youth, producing high rates of suspension, expulsion and involvement with the justice system. “Unfortunately,” says Staley, “those are communities that are already marginalized and, ironically, are not the communities that have been perpetuating the mass shootings that we’ve seen in Columbine and other places.”She adds that non-police violence prevention programs have been shown to reduce antisocial behavior, better identify youth in need of help, and improve the learning environment.Staley says school safety includes ensuring not only children’s physical safety, but their emotional and psychological safety as well, beginning with fostering positive school relationships.”Investing in the people who will help students feel safe, and that includes mental-health professionals, guidance counselors, social workers, school nurses, rather than armed school personnel,” she says.She also recommended that, when law enforcement personnel are brought into schools, they first receive age-appropriate, trauma-centered training.