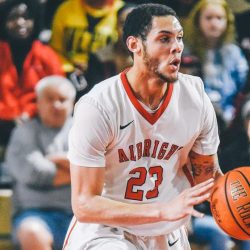 Smith, the MAC Commonwealth Player of the Year, earned the All-District selection after finishing his Albright career ranked 14th on the school’s all-time scoring list with 1,495 career points. He also led the Lions to the top seed in the MAC Commonwealth Championship and an at-large bid in the NCAA Tournament.

Smith finished the season ranked fifth in the league with 16.9 points per game, third with 7.8 rebounds per game, first with 2.1 steals per game and second with nine double-doubles.

Players were nominated for these awards by the sports information directors at the various schools. There were more than 680 players nominated nationwide. The ballot was then made available to SIDs, who voted for a predetermined number of players in their region.

This is the 17th year D3hoops.com has named an All-Region team and this year’s All-America team will be the 21st annual All-American selections. The D3hoops.com All-American teams, along with those of the respective coaches’ associations, are the only ones recognized in the NCAA record book.