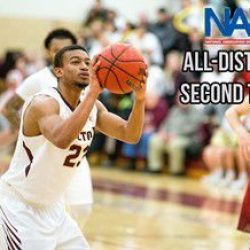 Lee led the Golden Bears (21-7 overall) in scoring at 21.5 points per game, ranking third in the PSAC, and in steals per game (1.8), which ranked sixth in the conference. He broke the school-record for made three-pointers in a game with eight, and in a season with 83. His 51.6 percent from beyond the arc was tops in Division II and the highest any player in KU history has shot in a season. He was also fifth in the conference in field-goal percentage (54.1) and fourth in free-throw percentage (86.8).

The Willow Grove native has totaled 1,470 career points, ranking him sixth in program history. He has scored in double-figures in 74 of his 82 career starts, including all 28 this season. Lee is also in the top-10 in school history in career 3-pointers made (183, fifth), career field goals made (508, eighth) and career steals (151, 10th).

The NABC recognizes the best men’s collegiate basketball student-athletes and coaches in the division. They are selected and voted on by member coaches of the NABC in Division II. There are 88 total student-athletes voted to the selective teams.

Other PSAC athletes voted in include Anthony Glover Jr. of IUP, Keyshawn Liggins on Edinboro and Dustin Sleva from Shippensburg, all on the First Team. Joining Lee on the Second Team is Steve Harris of East Stroudsburg and Micah Till from Slippery Rock.