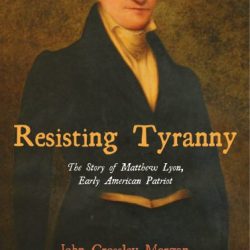 Resisting Tyranny is a new book about an American Revolutionary patriot, Matthew Lyon, a Congressman from Vermont, who was thrown into jail for criticizing then President John Adams under the Alien and Sedition Acts of 1798.

This is is the story of a young Irish immigrant who became a leader in the Republican Party of his time, a crusading newspaper editor, and the founder of a town in Vermont and another in Kentucky. His legacy makes history come alive in our time with warnings for us to treasure and protect our First Amendment rights.

“This book makes for fine reading, not just for its story value. Resisting Tyranny also gives an insight into the dynamic of how tyranny can thrive, not just in Lyon’s time, but our own. It speaks to the crucial importance of protecting our rights to free speech and a press.”

“At a time when a U.S. president and his sycophants, and even religious advisors, are accusing the media of inventing’ ‘fake news,’ this brief book inspires us to remember our priceless constitutional rights. This

Irish-American and friend of Ethan Allen and the Green Mountain Boys never feared to champion democracy against the pretensions and powers in both State and Church.”

“The sheer genius of this book is found the way it puts the average person in touch with this period of history and in the way it makes history’s lessons relevant for today. It warns against governments that step into tyranny to insure they can do what they desire to do against the will of the people.”

-WILL RANDOLPH, Director of Oce on Aging, United Methodist Church

“This is a good time for the Morgans’ book Resisting Tyranny to appear, as we live with Faulkner’s declaration, ‘The past is not dead, it’s not even past.’ Matthew Lyon’s story needs to be revisited, as some of the challenges to democracy Lyon faced, we confront in our time. In a real sense Lyon’s opposition to the then President John Adams Sedition Acts of 1798 is a mirror of what we face today in places of power. We need to heed Lyon’s letter to future citizens to take being a citizen seriously, ‘to organize for good causes,’ ‘to seek truth,’ and ‘challenge lies,’ if we are to preserve and extend our freedom. If not, the words of George Santayana may well come true, ‘Those who cannot remember the past are condemned to repeat it.’ This is a well written book without a dry word in it.”

John Crossley Morgan is adjunct professor of philosophy at Albright College’s School of Professional Studies, a newspaper columnist, and author of eight books and many articles.

Richard Lyon Morgan is a retired Presbyterian minister and history professor with over twenty books to his credit.