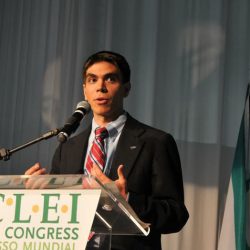 At age 22, Dominic Frongillo made history as the youngest-ever Town Council member in New York. He will visit Penn State Berks to talk about his work in climate change and clean energy on April 13, 2018, at 7 p.m. in the Perkins Student Center Multipurpose Room. This event is free and open to the public.

Frongillo will share his perspective as a town council member and United Nations delegate on how young people around the world are leading successful impact enterprises, grassroots movements, and innovations for sustainability and political change. He will also focus on inspiring stories from the front lines of the fight against climate change and for a sustainable future, from the United Nations climate negotiations in South Africa, to rooftop solar innovations in California, to winning a ban on fracking in New York.

In addition to becoming the youngest Town Council member in Caroline, New York, Frongillo was a five-time delegate to the United Nations. In 2012, he founded Elected Officials to Protect New York, a successful bipartisan campaign of over 850 elected officials across the state who helped win New York’s statewide ban on fracking. Internationally recognized for his work with Al Gore, he has served under Governor Paterson on New York’s Climate Action Plan advisory panel and is a current board director for Black Oak Wind Farm, New York State’s first community-owned wind farm.

Frongillo speaks frequently at universities across the country such as Brown, Cornell, and Furman on topics of climate change, sustainability, and social movements. Participants will learn how to get off the ground right after college to make a powerful impact.