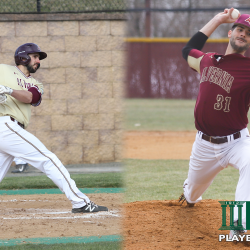 Ben Dubas (Sr., OF / Mechanicsburg, Pa.) batted .400 (4-for-10) and slugged .600 with two doubles, two runs scored and an RBI in a 2-1 week. Dubas opened the week going 1-for-4 with a walk, an RBI double and a run scored in a 7-5 setback to Kean. The senior responded by going 3-for-6 with a double and an RBI in doubleheader sweep against conference foe Messiah.