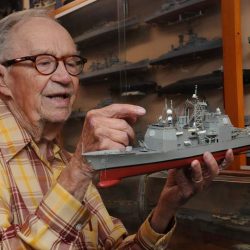 Edward H. Wiswesser, 100, passed away on March 3, 2018. He was the oldest alumnus of Penn State Berks. Born in Reading, he graduated from Reading High School and went on to earn an associate degree in the Junior Engineering Program of Wyomissing Polytechnic Institute (WPI) in 1937. WPI’s facilities were offered to Penn State for the establishment of a commonwealth campus in 1958, and the University granted WPI graduates full Penn State alumni status. Wiswesser remained an active member of the WPI alumni group up until his death.

The “top-notch education” of WPI, as Wiswesser described it, provided him with the background to build a successful career. From 1940-1946, he worked at the Philadelphia Naval Yard designing warships for the United States Navy, including the Battleships New Jersey and the Wisconsin. He also worked for Doehler Die Casting, Gilbert Associates, and finally Spotts, Stevens and McCoy. After his retirement in 1982 from SSM, he continued to work in the engineering field as a private consultant. In addition, he was the past president of the Reading Chapter of the Pennsylvania Society of Professional Engineers and past president of the Reading Chapter of the Navy League of the United States.

Despite his impressive professional accomplishments, Wiswesser’s main passion was trains. Often seen wearing suspenders, a flannel shirt, and his conductor’s cap, it was obvious that he was a train enthusiast. Specifically, he was passionate about the steam locomotives. It’s this dedication that led him to chronicle their history in a book titled Steam Locomotives of the Reading and P&R Railroad, published by Greenberg Publishing in 1988.

Wiswesser caught “railroad fever” at an early age and his passion for steam locomotives stayed with him. He recalled growing up near the Spring Street Subway in Reading during the 1920s. His parents would alert him to incoming trains, and rolling down the street in his kiddy car, he would stop at the corner to watch in awe while one of the iron giants rumbled over the tracks, sounding its whistle and puffing out smoke as it towed a line of trolley cars.

“Reading always was a railroad town­­–everybody had a grandfather or uncle or someone who worked for the railroad,” commented Wiswesser. It’s for this reason that he decided that writing a book on the steam locomotives would be well received throughout Reading and beyond.

The idea to compose a book about Reading Company locomotives struck him, “right in the caboose one day,” according to Wiswesser as he was digging through blueprints and documents in the Reading Company Drawing Room—not too unusual for a railroad enthusiast and engineer who used actual blueprints to build model-train replicas.

Wiswesser took the idea and his findings back to a group of fellow railroad enthusiasts who called themselves “the Reading Railroad guys,” and naturally they were on board with the project. When work on the book started, they took on the name “Reading Rails Publishing.” Wiswesser held meetings at his house.

The book is known for its high level of detail and inclusiveness. Reading Rails Publishing compiled statistical information, prints, and photos to document every steam locomotive that ever ran on the Reading Railroad from the time the locomotive was built until the time it was sold or scrapped. After three years of hard work and research, Wiswesser was ready to publish.

“There’s a certain nostalgia that steam locomotives invoke for older generations and hopefully this book will help to keep the Reading Company’s trains documented for future generations.”

He continued to spend his days building replica steam locomotives in the basement of his Reading home.

Wiswesser was pre-deceased by his wife, Jane (Warren), in 1995. He is survived by two sons, one daughter, and six grandchildren.