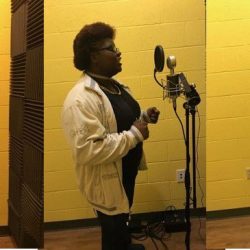 READING, PA — The Olivet Center for the Arts -Teen Chorus will be recording live at Gravity Studios in the Olivet Pendora Park Club, taking advantage of the most recent music program initiative offered to Olivet Club kids through Reading Musical Foundation.

Currently the Foundation offers over 15 hours weekly to students across various clubs in the city of Reading with the extraordinary Cliff Starkey at the helm of Olivet’s Digital Music programs. Cliff oversees Drop Da Beat at GoggleWorks and Gravity Studios at Pendora Park.  He has been playing keyboards for over 40 years and has performed around the world with artists such as The Three Degrees, Lisa Simone, and Manuel Garcia. Mr. Starkey has performed on popular TV shows such as “Good Morning America”, “The Rachael Ray Show” and was the house keyboardist for the “Emeril Live” Show for 9 years. He has performed with artists such as Dave Koz, Sammy Hagar, Jonathan Butler, Michael McDonald, and more.

Over the years Cliff has developed skills in working with digital music recording software and currently teaches students from the Olivet Boys and Girls Club how to use it. These include group lessons on keyboard, guitar, percussion, as well as two choruses and a digital music program in partnership with the computer center at GoggleWorks Center for the Arts.

Gravity Studios is being developed with the following collaborations and goals in mind:

The Teen Chorus Club members will be recording a cover of Strange Fruit, a song performed most famously by Billie Holiday, who first sang and recorded it in 1939 and THE song of the 20th Century.

Written by teacher Abel Meeropol as a poem and published in 1937, it protested American racism, particularly the lynching of African Americans. Such lynching’s had reached a peak in the South at the turn of the century, but continued there and in other regions of the United States. According to the Tuskegee Institute, 1,953 Americans were murdered by lynching, about three quarters of them black. The lyrics are an extended metaphor linking a tree’s fruit with lynching victims.  Meeropol set it to music and, with his wife and the singer Laura Duncan, performed it as a protest song in New York City venues in the late 1930s, including Madison Square Garden. It was also dubbed, “a declaration of war … the beginning of the civil rights movement” by record producer Ahmet Ertegun.