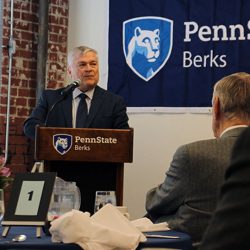 Penn State University President Eric J. Barron visited with Berks County community leaders to discuss the role of Penn State Berks in economic development. He focused on the success of student entrepreneurs through the Invent Penn State initiative. The luncheon was held on Friday, March 16, 2018, at the GoggleWorks Center for the Arts in Reading.

Launched in 2015 by President Barron, Invent Penn State is a $30 million Commonwealth-wide initiative to spur economic development, job creation and student success. It has redefined the University’s land-grant mission to include entrepreneurship and innovation programs, tools and resources that accelerate the movement of great ideas to the marketplace and make a substantial economic development impact in Pennsylvania and beyond.

Barron noted that at Penn State Berks, several groups of students are currently demonstrating entrepreneurial spirit by working to create medical innovations, ranging from a better arm sling–a project started by Electro-Mechanical Engineering Technology major Nickolas McTish and Mechanical Engineering major Madison Wojciechowski and now being developed as part of a class project in the college’s Small Business Development course. Other projects under development in the same course include retractable oxygen tubing to make the use of home oxygen tanks safer and more convenient and an anti-tipping mechanism for wheelchairs.

Meanwhile, junior Business major Ryan Morris and sophomore Information Sciences and Technology major Tristan Morales have founded Traduki Technologies LLC, a start-up that offers real-time language translation services for health care professionals and businesses. Morris and Morales, along with two other students who are still involved in the company, came up with the idea when they were enrolled in the college’s Entrepreneurial Mindset course. After the course ended, they were encouraged by their professor, Dr. Abdullah Konak, to purse the project as a business.

Their company is piloting the technology in health care, connecting medical professionals with freelance translators who are available via video chat, phone call, text message, and in person. This allows for flexible, efficient and affordable services.

Barron also discussed the Veggie Rx program. “This is a great example of the social entrepreneurship work that is made possible by the partnership between Penn State Berks and Penn State Health St. Joseph.”

The idea came about as a way to address the growing problem of obesity, diabetes and other conditions relating to a diet lacking in fruits and vegetables. Veggie Rx takes a two-pronged approach to solving the problem. First, physicians and clinical staff identify patients who can benefit from a diet of increased fruits and vegetables. They then prescribe vouchers for produce that can be redeemed at various retail locations within the city.

With the support of Invent Penn State, both organizations currently support a joint-employee position. Lisa Weaver serves in this position half-time at Penn State Health St. Joseph as Healthy Community Program Associate and half-time at Penn State Berks as Social Entrepreneurship Specialist. She is facilitating the pilot Veggie Rx program at Penn State Health St. Joseph’s Downtown Reading campus. Clinicians will collaborate with various student groups who are assisting with translation, promotion, and creation of nutrition education resources. In addition, college faculty have helped to write a proposal that would allow in-depth research of the program’s effectiveness.

Entrepreneurship is not limited to the medical and health care fields. Jovan Tate, another student-entrepreneur, has recently signed a contract with the University for his campus-based car-sharing platform for college students–Campus Cars. The start-up will loan cars to college students who live on campus for a monthly fee or an hourly rate. Tate will present Campus Cars to potential venture capitalists during the Invent Penn State Venture and IP Conference, April 19–20 at the Penn Stater Conference Center Hotel.

Another team of Penn State Berks students will be featured as one of six finalists in the upcoming PennTap Inc.U competition. The team, who adopted the name Trimatis and is mentored by Dr. Marietta Scanlon, is developing a method to recycle plastic bottles as filament for 3D printers. They will compete for $30,000 in prize awards on Saturday, April 7, during a live taping of the WPSU program, The Investment, at Penn State’s PBS Studio in State College.

Penn State Berks encourages entrepreneurship through initiatives such as the Entrepreneurship and Innovation minor. This interdisciplinary 18-credit minor is designed to foster an entrepreneurial spirit, creativity, and leadership in students.

Currently, 19 students from a wide range of majors are enrolled in the minor and an additional 19 are majoring in the Hospitality Management with the Hospitality Entrepreneurship Option.

“Building vibrant Pennsylvania communities depends on spurring economic development and providing the support to help businesses succeed,” explained Barron. “It also depends on the infusion of new ideas that can move forward with the energy and enthusiasm of aspiring entrepreneurs.”

In fact, Joseph Sinclair, who is one of the LaunchBox’s entrepreneurs-in-residence, was recently awarded a patent for the monitoring of additive manufacturing methods. A Penn State alumnus, Sinclair is showing students how to successfully launch an idea.

“Penn State Berks exemplifies our mission of engagement, and the history of this campus is a perfect expression of Penn State’s commitment to serving the communities of Pennsylvania,” stated Barron. “This is what it means to be a public university that combines excellence in teaching, research and service. It also embodies our land-grant mission of ensuring access to a top-notch education and improving the quality of life for everyone in the state, and society in general.”