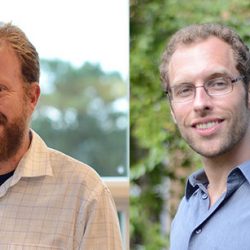 Neag Professorships, established in 2010 though the generous support of Carole and Ray Neag, are awarded to faculty members who have demonstrated excellence in scholarly work and distinction in teaching — whether in undergraduate liberal arts education or in graduate and professional education.

Named Senior Neag Professor for 2018-20, Kevin Donnelly, Ph.D., is the author of “Adolphe Quetelet, Social Physics and the Average Men of Science, 1796–1874,” exploring the life and career of one of the earliest scientists to work in quantifying traits of nations and peoples. Quietelet and Charles Darwin’s work inspired Francis Galton to invent the idea of Eugenics, a controversial plan to affect the human race though selection and sterilization, made infamous by Nazism. Donnelly is currently working on a primary source book on the history of Eugenics, that will include the voices of those who developed, performed and suffered from the practice.

Recent scholarship of Junior Neag Professor Mark Kaufman, Ph.D.,focuses on the intersection of law and literature, especially as it pertains to the discord between government secrecy and freedom of expression. He is currently working on a book titled “Spyography: Modernism, Espionage, and the Militant Aesthetic State,” examining the problematic recruitment of writers into the British Secret Intelligence Service (MI6) through literary texts, memoirs and declassified government documents housed in the UK National Archives. His work has appeared (or is forthcoming) in a number of journals, including “James Joyce Quarterly,” “Virginia Woolf Miscellany” and “The Space Between.”